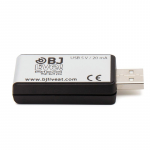 To ensure the safe operation of the device it is recommended to read this user manual completely before starting to use the device.

Use your BJOY Ring Wireless to access several devices (PC, Android tablet and mobile), and switch easily between them all with a joystick gesture or double switch press configured in the BJOY Software.

You can pair your BJOY Ring with up to 4 receivers , so you can control 4 different devices from your wheelchair’s joystick, without needing to connect any cables, simply by approaching the device you want to control (if it’s in a different room) or switching between them all.

How to add more receivers

One emitter can be paired up to four receivers. By default the product includes one receiver paired to the emitter. To add more receivers follow these steps:

STEP 1.
Plug the receiver into the device you want to control (PC or compatible tablets and smartphones). STEP 3.
Press the pair button in the emitter. STEP 4.
When emitter and receiver are paired, the red LED of the receiver and the green LED of the emitter will be on for 2 seconds.

Pairing a fifth receiver will delete the first paired receiver and so on. How to toggle among receivers

BJOY Ring wireless can be used to access up to four different devices. These devices can be located in different environments or in the same environment.

Scenario A: Devices in different environments.

If the receivers are located in different environments (for example in the school and at home) it is not necessary to toggle. The emitter recognises automatically the paired receiver when the user gets closer. This process may take up to 10 seconds. Make sure that the BJOY Ring is activated.

Scenario B: Devices in the same environment. It is possible to alternate among paired receivers so that the user can access different devices located within the same environment.

There are two ways to alternate among receivers: IMPORTANT: When the device is activated after shut down or idle, it will connect to the last connected receiver if this receiver is within the coverage range.

Clean the product with a slightly damp cloth. Always do it with the device unplugged.

If your unit does not work properly, do not manipulate it and get in contact with your distributor

Within the statutory warranty period we undertake to rectify free of charge by repair or replacement any product defects arising from material or production faults.

Any unauthorized tampering with, or modifications to the product will annul this warranty.

This product complies with the European directives 2004/108/EC. The declaration of conformity can be consulted at the company’s web page.

The Declaration of Conformity can be downloaded from the product’s webpage at https://bjliveat.com/index.php?controller=attachment&id_attachment=322

If, despite of correct handling, faults or malfunctions occur or if the product was damaged, please contact us at the address below: