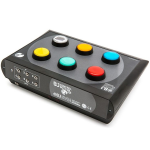 In order to ensure the safe operation of the device it is recommended to read this user manual completely before starting to use the device.

When the activity is changed, the scenes (buttons) will change and the controller will launch different contents accordingly.

Parts of the equipment

This remote has an ergonomic keypad with six buttons, 6 switch inputs, an infrared port, LED status indicator, on/off switch and input for battery charging.  It is powered by a battery that can be recharged by connecting it directly to the USB port of a computer or to the mains using the charger supplied with the remote control.

It allows programming up to ten different functions: two functions per each button, with the exception of the scene change button. If you do not want to use both scenes, you can program functions on the six buttons of the remote.

When using the remote to control elements of a Sensory room, the six buttons will correspond with the 6 first buttons programmed in a scene of the SHX Software.

Changing the covers of the buttons

It is possible to change the covers and the labels of the buttons. This allows choosing among different covers (transparent or colour ones) and change the icons to label the buttons if desired.

Remove the covers by introducing any thin object in the covers’ slot and pull towards the buttons outside. To facilitate the explanation of the operation of the device, we have associated a symbol to each button. See figure below (Fig. 2). Fig. 2. Symbol associated to each button.

The programmed functions can be enabled by directly pressing the buttons or by means of switches.

The remote uses radio frequency signals to control BJ System devices, so you can activate the device with no need to aim the remote to the receiver.

Infrared signals are used to control devices operated by remote controls (e.g. TV, DVD players, etc). In this case, there must be a direct line of sight between the remote control and the receiver, just as there would be with the original remote control.

A scene is a set of programmable keys (buttons) on the remote. To increase the number of devices controlled, you can change the scene on the remote. When the remote changes the scene, the functions programmed in the cells are stored but no longer active. There are five programmable cells in each scene on this remote and a total of two scenes. This means that you can program up to 10 different functions.

To change the scene, activate the key that you programmed for changing the scene, which is the key in which code 300 was recorded (see section “Programming” in this manual).

IMPORTANT: You must activate the scene key every time you want to change the scene. Until this key is activated, the remote will remain in the selected scene. Therefore, if you record code 300 in a key in scene 1 in order to switch to scene 2, you will need to record the same code in a key in scene 2 to be able to go back to scene 1 again.

Once a scene has been selected, the basic programming and operation of the remote is as described in section 1.

When the remote is in the second scene, the LED will flash green.

The way to program the remote depends on the type of equipment you wish to control, i.e. whether it is a BJ System receiver or a device that works with infrared (devices that already have a remote control, like televisions, DVD players, stereos, etc.).

To control BJ System receivers, you must assign the RF code identifying the receiver to the key on the remote that will be used to operate with this receiver.

What is an RF code?

For a remote to control the various receivers installed, each receiver must be identified by a code that differentiates it from the others. Each receiver has an “RF code selector” that allows you to assign a code to it. By programming this code in the BJ System remote, you can control each of the receivers installed. See the user manual of the receiver you wish to control to find out its RF code.

Once you have the information on the code to program, follow these steps:

IMPORTANT: The RF code programmed into the remote must be always a three-digit number, so if the code indicated for the receiver only has two digits, add a 0 in front. For example, if you have a receiver for a socket with the code 37, program the remote with the code 037.

It is a good idea to use the programming template when programming (fig. 3) as it indicates the numbers and functions associated with each key. In the following example, we will program the  key ⋆ in scene 1 to control an alarm receiver with an “RF code” of 25. The programming steps are as follows:

IMPORTANT: If the remote freezes while programming or you wish to cancel it, you can exit programming by pressing the (×) key at any time during the process.

NOTE: Code 255 cancels all functions assigned to a key.

Prepare the remote you want to duplicate. Make sure that there are no other infrared devices switched on in the room (some laptops, mobile telephones and other devices could interfere with the recording process).
When duplicating a remote control for a device, you need to remember that each key on the remote can only be programmed with a single function of the remote control of the device. For example, if you wish to control the volume of a stereo system, you need to record the “volume up” function on one key and the “volume down” function on another.

To program an infrared function, follow steps 1 and 2 of the previous section for RF code recording, and then: Summary of codes for programming and special codes

Maintenance and use of the device

The battery needs charging when the LED on the remote flashes red. To charge the remote, follow these steps:

IMPORTANT: Before charging the battery check that the on/off switch is on (position 1)

IMPORTANT: Switch off the remote if it is not in used. This will extend the battery life.

Within the statutory warranty period we undertake to rectify free of charge by repair or replacement any product defects arising from material or production faults.

Any unauthorized tampering with, or modifications to the product will annul this warranty.

This product complies with the essential requirements of the Directive 2004/108/EC.

If, despite of correct handling, faults or malfunctions occur or if the product was damaged, please contact us at the address below: